NEW DELHI: DGCA has suspended the licences of the two pilots of the Jet Airways plane that attempted a take-off from a taxiway at Riyadh airport. The action comes after Saudi aviation authorities made this damning finding public following a probe into the incident which had happened at 00:03 hours local time Riyadh.

attempted to take off using full power from a taxiway
+ parallel to the runway from where it was supposed to get air borne for Mumbai.

“Jet Airways B-737 (VT-JFS) flight (9W) 523 headed to Mumbai with 141 passengers and seven crew members overshot taxiway at KKIA (King Khalid International Airport at Riyadh). Initial factual information confirms that the aircraft attempted take off from taxiway parallel to take off-designated runway while visibility was high and no obstacles or FOD (foreign object debris) on the taxiway. The aircraft accelerated with full take off power and exceeded the taxiway on to unpaved area ending up close to the exit of taxiway,” Saudi Arabia’s Aviation Investigation Bureau (AIB) said in a statement. 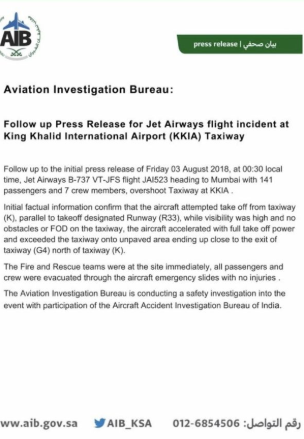 A senior official of Indian DGCA said it has suspended license of both the pilots involved in runway excursion incident at Riyadh pending investigation.

“The fire and rescue teams were at the site immediately, all passengers and crew were evacuated through the aircraft emergency slides with no injuries. The AIB is conducting a safety investigation into the event with participation of the Aircraft Accident Investigation Bureau of India,” it added.

Following Saudi probe report, Jet on Monday said the airline is “in contact with the DGCA and has extended all co-operation with regard to the said incident. The airline will continue to adhere to all requirements as laid down by the regulator. The matter is currently under investigation and we cannot comment on this issue. At Jet Airways safety is of paramount importance of its crew and guests.”

Jet had last Friday said that the incident happened when their plane was trying to take off from the runway. “Our flight 9W 523 with 142 guests and 7 crew members from Riyadh to Mumbai of 3rd August aborted takeoff and departed the runway at Riyadh Airport. All our guests and crew have been evacuated safely with no reported injuries,” the airline had said.

But the preliminary probe by Saudi authorities has found that the lane was trying to take off from a taxiway parallel to the take off-designated runway at full power.